Dorset Queen was built by Noble & Sons in Scotland in 1938, named ‘Gay Queen’ and spent her first 2 years cruising the Kyles of Bute & Loch Striven.

1940 - Requisitioned by The Royal Navy

In 1940 she was requisitioned by The Royal Navy for war duties and is believed to have taken part in the Dunkirk rescue missions.

After the war ended, she returned to Rothesay to her former life as a passenger vessel.

In 1963 Gay Queen was once again used for military purposes, operating at the US Navy Base in Holy Loch.

In the 1990’s she was renamed ‘Alice Marie’ and operated services from Poole Quay to Wareham and Brownsea Island.

In 2005 Alice Marie moved to Falmouth to operate as a St Mawes Ferry named ‘Queen of the Fal’.

Dorset Cruises purchased a very tired Queen in 2008 and after lovingly restoring her to her former glory, we renamed her ‘Dorset Queen’.

Dorset Queen celebrated her 80th Birthday in 2018 and was presented with her UK National Historic Ships Certificate.

Dorset Queen became a triple award winner at the 2019 BH Star Awards, including ‘Corporate Venue’, ‘Event of the Year’ and ‘Transport’ categories.

Dorset Cruises were voted ‘Best Charter Company’ in the South of England.

She is now only vessel on the South Coast with a warrant to fly a ‘defaced ensign’.

Dorset Cruises, along with the rest of the UK’s Hospitality Industry, was forced to close down during the Worldwide Coronavirus Outbreak.

Despite the awards ceremony being cancelled due to the pandemic, Dorset Cruises won ‘Best Corporate Hospitality Venue’ award at BH Stars 2020.

The trophy was presented on Poole Quay at 2 metres distance from the sponsor.

Dorset Queen was built in Scotland in 1938 and spent her first 2 years cruising the Kyles of Bute and Loch Striven.

She was originally named ‘May Queen II’, but the Board of Trade rejected this title, leading to a last minute change and her being launched as ‘Gay Queen’.

When World War II broke out Gay Queen was requisitioned by the Royal Navy and is believed to have been a volunteer boat in the Dunkirk rescue missions.

After the war she returned to Rothesay, Scotland to take passengers on sightseeing trips, staying there until the 1960’s.

Her next port of call was the US Naval Base in Holy Loch, before her first journey to Poole in the early 90’s to operate for Greenslade Pleasure Boats.

Then owner, Rusty Greenslade named her ‘Alice Marie’ after his granddaughter and used her as a Wareham River Cruiser for many years until his retirement.

Greenslades’ sold ‘Alice Marie’ in 2005 to Newman’s Cruises in Falmouth and she then became known as ‘Queen of the Fal’.

Dorset Cruises purchased a very tired Queen in 2008 and after lovingly restoring her to her former glory we renamed her ‘Dorset Queen’.

Dorset Queen is now the only vintage motor yacht on the South Coast of England and a proud member of the UK Historic Ships Register. 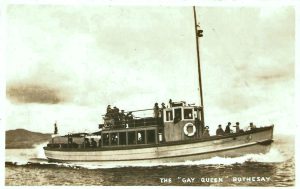 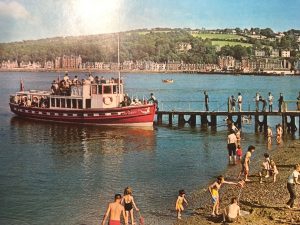 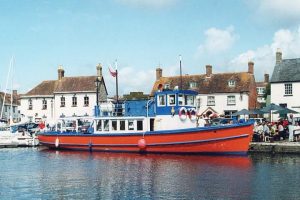 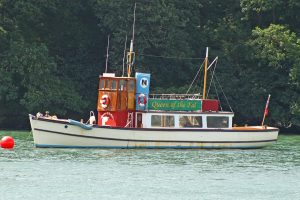